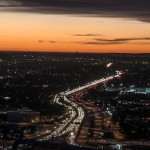 Los Angeles, also known as The City of Angels, L.A., Southland, La-La Land, Tinseltown, Smog Angeles.  With more than 3 million people residing in the city and 13 million in the surrounding areas, Los Angeles is the second largest city in the country and the most populus city in California. With an average weather of about 72 degrees, this is where I happily call home. 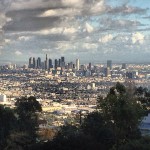 Los Angeles is so widespread, it’ll be impossible to see everything in one day, so you’ll  definitely want to make an itinerary.  If you don’t, you’ll more than likely waste precious time.

The most popular Los Angeles attractions are in Hollywood, Beverly Hills and the beaches.  Here are some favorite spots and helpful tips: 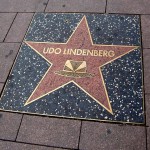 Hollywood Boulevard – Almost every visitor’s first stop, but first thing you’ll notice is the expensive parking in the area.  Don’t be afraid to park at the Hollywood and Highland Center.  It’s $2 for 2 hours with validation  a participating store, restaurant, or even nightclub and $2 for 4 hours if you go inside the theater.

There’s parking available off of Hollywood Blvd, if you’re lucky enough find a spot.  Sometimes there are spots available by the high school, which is a block away.  Be sure to read the street signs first. 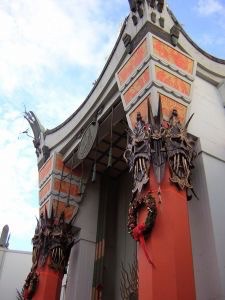 Grauman’s Chinese Theater – This theater is at the top of everyone’s list of Hollywood Blvd attractions.   Mostly visited for the Walk of Fame and the court of celebrity signatures with handprints.  However, the iconic theater itself  is quite the spectacle.

It’s always very crowded during the day.  I suggest going on a late night Sunday or Monday for the best photo opportunity.

If you’re looking for casual inexpensive restaurant, I suggest Mel’s Drive In, just off of Hollywood Blvd on Highland Ave. 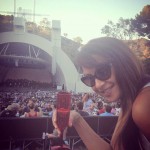 Hollywood Bowl  –  This famous amphitheater has been around since the 1920’s. It’s  My favorite place to see a concert during the summer.  I tell you, it’s a magical spot.  Not only for the acoustics and the bowl shaped theater,  but the outdoor surroundings is beautiful.  It’s home to the Hollywood Bowl Orchestra, summer home of the Los Angeles Philharmonic and hosts many events every year. 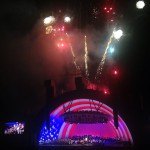 An added bonus to this theater is that during the L.A. Philharmonic shows, you’re allowed to bring in a picnic basket to your seats. When the Bowl is leased for a event, you’re not allowed to bring  food or drinks inside,  but you can picnic outside with plenty of space for everyone.

If you’re around the 4th of July, you’ll be treated to an amazing evening with an exciting fireworks show at the end.  I try to go every year. I highly recommend catching a show at The Hollywood Bowl.  You won’t regret it!

Farmer’s Markets – What visitors don’t know is that Hollywood has some amazing Farmers Markets.

One is on Ivar and Selma, between Hollywood and Sunset Blvd.  Its on Sundays  at 8am-1pm. 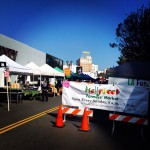 Another one is the Yamashiro’s Farmer’s Market on Thursdays, 5pm-9pm. The last one beingThe Original Farmer’s Market with over 100 grocers and restaurants.  Its connected to The Grove shopping center which makes a great day of shopping and dining.

My favorite wine bar and market, Monsieur Marcel is also inside of The Original Farmer’s Markets. Its a local’s spot with great, wine and people watching, which tourists find enjoyable too! 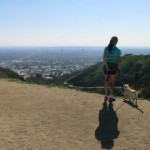 Hiking – How do you find the best views of Los Angeles?  Well, you put on your hiking shoes & walk up the many trails in the Hollywood Hills.  That’s where you’ll find the amazing view of the city.

The most popular hike is Runyon Canyon Park.  It’s just off of Hollywood Blvd.  at 200 North Fuller Avenue.  You’ll get sweeping views of the city and sometimes you’ll spot a celebrity. 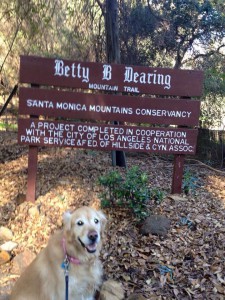 Another smaller trail is Fryman Canyon Park.  It’s more of a local’s trail,  but you get to hike in a more forest setting with a dramatic view of the valley. It’s  8401 Mulholland Drive in Studio City.

One hike I highly recommend is the Hollywood Sign through Griffith Park  No, you can’t hike up the face of the sign, but there is a road that you can hike and it wraps around the hill up to behind the sign.  It’s one of my favorite hikes in Los Angeles.

These are just a few of my favorite trails. There are many more hikes in L.A. I suggest you research your choice of hike beforehand .  So, don’t  forget your hiking shoes, attire and suncreen! 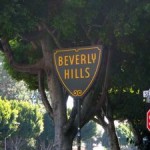 While Beverly Hills is world famous for their celebrities, Rodeo Drive and all the famous shops and restaurants, there are some hidden gems in the city that many don’t know about. 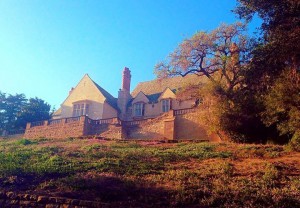 Greystone Mansion – I had the pleasure of attending an event last summer at this historical mansion.  Sprawling on 16 acres, this Tudor Revival Mansion, built in 1928 is 46,000 sq. ft.  While I didn’t get actually go inside of the mansion, I was able to roam the beautiful landscaped English gardens. 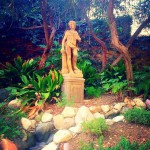 There’s also quite a storied past about the original owners.  However, today it’s a public park and occasionally special events are held there.  Filming goes on at this famous mansion, as well.  If you’re interested in visiting a historical mansion with some mystery, than make sure Greystone Mansion is on your itinerary.  Address is 905 Loma Vista Drive, Beverly Hills. 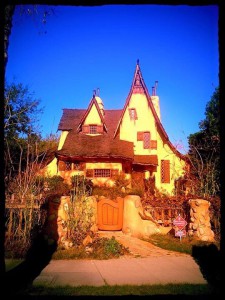 Storybook Homes– Though the homes in Beverly Hills are all mostly large and expensive, there are some houses that are truly “fairytale”.  There’s the Spadena House at 516 Walden Drive, also known as the Witch’s House. Built in 1921 for a silent movie film Studios in Culver City and later moved to Beverly Hills.  The house reminds some of a Hansel and Gretel House. 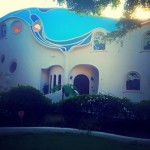 There’s also the O’Neill House at 507 N. Rodeo Ave.  Some people think it could be in Alice in Wonderland. The facade was inspired by the designs of architect Antoni Gaudi.  These houses are a real treat to visit. 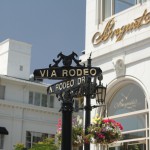 Shops and Eats –  Beverly Hills is known for it’s high end boutiqes and restaurants on Rodeo Drive and surrounding streets, but there are great, yet less extravagant shops and food places that you should drop in on.  Here’s a list of  some of them:

1. The Cheese store of Beverly Hills -If you’re into cheese, than you’ll be in heaven!  If you’re not, you’ll still appreciate the artisanal aspect of their large variety of cheeses,  as well as other premium products and great service.

2. Niketown – Everyone knows Nike and to find a Niketown in Beverly Hills seems like a bad fit, but its NOT!  With 2 stories of great Nike shoes, attire and accessories, everyone will walk out with something. This store is always busy with locals and tourists who linger here for hours.

3. Papa Jakes Sub Shop  – If you’re starving after a day of shopping and don’t want to wait around for a table at a fancy restaurant, I suggest you grab something to eat here.  While Los Angeles isn’t known for the Cheesesteak sandwiches, Papa Jakes begs to differ!!  Steak, chicken and even vegetarian (mushroom steak) cheesesteak sandwiches are truly delicious.  They have a variety of frest cut fries that are to die for too!

4. The Honor Bar – If you’re looking to catch a bite and have a cocktail, then look no further and go to The Honor Bar.  It’s on South Beverly Drive in the midst of all the boutiques including Chanel.  Menu is small but perfectly made.  Drinks are strong and deliciously prepared with a wide selection of beer, wine and spirits. Its a quaint spot that’s cozy and warm.  Perfect for place to kick up your heels after some shopping. 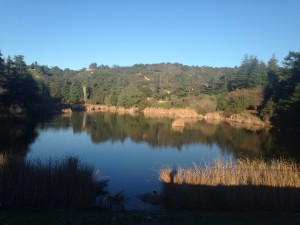 Franklin Canyon Park – If you’re looking  for a nature experience in Beverly Hills and yes , you can have that, than come to this beautiful park.  Put on your hiking shoes, bring a picnic basket and spend the afternoon here.  This secluded park is 3 acres with a lake, a duck pond, picnic benches, an amphitheater and over 5 miles of hiking trails. 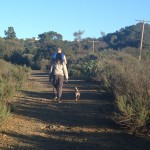 There is ample parking, however, be sure to obey all traffic laws in the area.  There are cameras at all stops and you will get a ticket if you don’t stop.  I’ve seen it happen many times. Other than that, enjoy a relaxing day in a peaceful, scenic park. 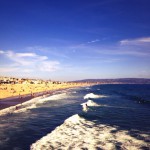 Los Angeles is know for the amazing beaches. They all have different personalities. There’s the big and festive Santa Monica state beach where the popular Pier is the star.  There’s the vibrant Venice Beach where the colorful boardwalk and people-watching are the focal points. But, if you want to visit the truly  beautiful beaches, then head north to Malibu

My favorite beaches are up Pacific Coast Highway, north of Santa Monica.  No wonder the celebs live up there.  Leo Carrillo State Park, Surfrider Beach, El Matador State Beach, all the way up to the County Line Beach. 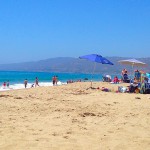 One beach on the way is Zuma Beach, which is my favorite beach in Los Angeles. Zuma has long, wide sands with great surf.  Parking is ample, though it can get very crowded on summer weekends.  Get there early and stay late.  Keep your eyes on the water, you may even see dolphins!

This is just a portion of tips and favorites of my city.  Many more recommendations, to be continued in their own sections: