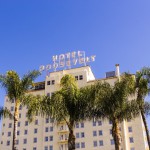 Hotels in Los Angeles are widespread throughout the city, simply because L.A is so, well, widespread.  As mentioned, you need to do your research on what area you want to stay in Los Angeles, whether it’s Hollywood, West Hollywood/Beverly Hills, Santa Monica and other Beach Cities, Downtown L.A. or the suburbs of Los Angeles.  Pick the Los Angeles attractions you want to see and pick a hotel close by them.  Be sure to know your budget and stick to it.  Here are some of the best..