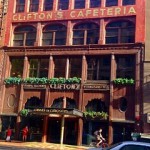 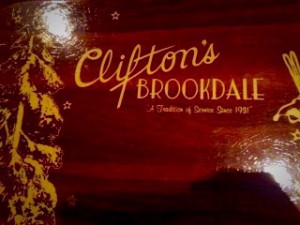 Lucky  for all of you, this kitschy cafeteria recently re-opened, after being closed for some years, for a remodel.  Now, it’s bigger and more whimsical than ever.  So, no one has an excuse to not eat at the historic cafeteria. Clifton’s, still classic, still campy, more fun! 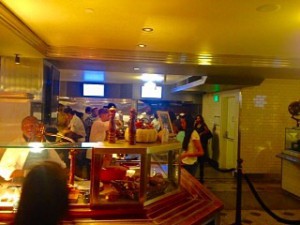 Clifton’s Cafeteria, located in downtown Los Angeles, opened in 1935, by the Clinton family.  Originally called Clifton’s Brookdale.  It’s the last of a chain of Clifton’s Cafeterias and the oldest cafeteria in Los Angeles.  The name Clifton is a combination of the original owner’s name, Clifford Clinton. I never knew that! 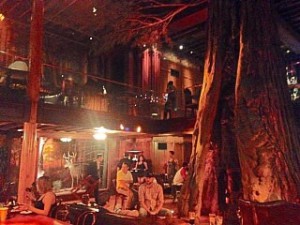 In 2010,  after 75 years of ownership, the Clinton Family handed over the reigns to Andrew Meieran, a developer and nightclub owner, who paid $3.6 million for the building.  He spent $10 million more to transform the cafeteria to what he calls a “cabinet of curiosities” which is spelled out, above the front door.

Meieran removed all old additions from the past and found original features that were undiscovered, until now.  They were hidden for many years, including murals and a tiny grotto by the entrance. A piece of neon was even found in the basement and was moved to a new location for all to see.

Meieran preserved the original cafeteria and went wild on the rest of the building! There are taxidermy stuffed animals everywhere, including a buffalo.  There’s an atrium and a 3 story tall redwood tree that you can dine under. There’s a a 250 pound meteorite perched at one of the bars, there’s a peacock room and secret little rooms.  The list goes on! 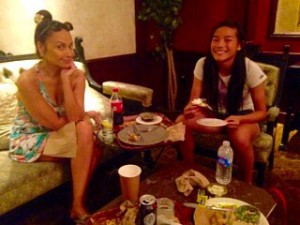 Clifton’s has 2 eateries, one being the original classic cafeteria.  The second spot is where you can grab pastries and coffee in the morning. Seating for dining is scattered all around the building.  So take your vintage tray of food and find a fun spot to dine! 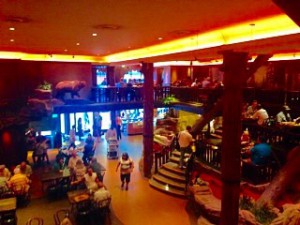 There are 5  bars all around the 5 story building. On the 2nd floor, there’s the Cathedral Grove, a casual bar with a classic soda fountain and many types of beverages. The 3rd floor is the Gothic Bar, with a side bar where you’ll find dj’s and  live bands.  The 4th floor is Treetops, an art deco-style bar and lounge.  Also, the Pacific Seas tiki bar is on the 4th floor.  The decor for the tiki bar comes from famed, but now closed, Bahooka’s Restaurant in Rosemead.  A place where I spent my childhood eating at.  So, that’s extra special for me! 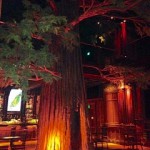 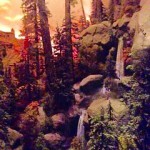 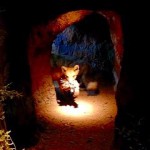 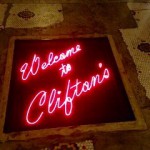 There’s also a speak-easy lounge in the basement, called Shadow Box.  However, not everything is opened, just yet.  You can certainly dine in the cafeteria and enjoy a drink.  Grab a table on one of the many floors, with many themes and explore afterwards!  Make sure you have plenty of time, because it’s not just a meal, but an adventure!  648 S Broadway, Los Angeles 90014